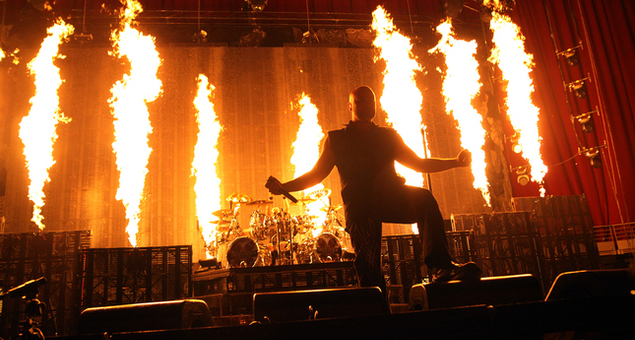 Disturbed like surprising their fans with special live treats. This time, fans in Nashville enjoyed Halestorm‘s Lzzy Hale as a special guest on Disturbed cover for U2’s ‘I Still Haven’t Found What I’m Looking For’ on May 7.

Lzzy Hale joined David Draiman in the midst of the band’s cover medley, which is part of Disturbed setlist on the current tour. Besides the U2 classic, Draiman and Co. are treating their audience with Nine Inch Nails’ ‘Closer,’ The Who’s ‘Baba O’Riley’ and Rage Against the Machine’s ‘Killing in the Name.’ Check out the fan-shot footage of the joint U2 cover performance below.

It can be said with certainty that Draiman and Hale have had warm and creatively productive relationships for a long time. Earlier Hale contributed to a cover of the Lita Ford / Ozzy Osbourne ‘Close My Eyes Forever’ for Draiman’s other band, Device.

Disturbed are currently co-headlining a US tour with metal powerhouse Rob Zombie, whose new album ‘Electric Warlock’ has just debuted at No. 6 on Billboard 200. The run wraps up at the end of May, followed by Disturbed appearances in European summer festivals, including Germany’s legendary Rock am Ring (Jun 3), UK’s renowned Download Festival (Jun 12), Belgium’s Graspop Festival (Jun 17) and France’s Hellfest (Jun 18).

In the middle of July the band will fly back to the US for another leg of shows in North America. And awesome news for Disturbed fans «down under»: this fall Disturbed will also visit Australia and New Zealand with 5 shows, starting on November 9.