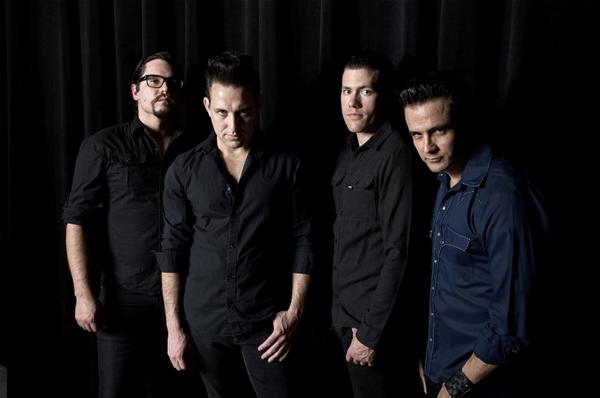 Dommin have just released their new studio effort, Beautiful Crutch, so we called the frontman, Kristofer Dommin, to ask him which songs on the new record he thinks will become the fans’ favorites, reflect on what was surprising about the reactions to the previous album, Rise, and find out more about Kristofer’s other music projects.

— You’ve recently released your new studio album, Beautiful Crutch. What feedback do you expect? Which songs do you think will become fans’ favorites?

— I think most of the existing Dommin fans will gravitate towards the emotionally heavier or more dramatic songs.  This could be «I Die,» «The Saddest Dream,» or «The Flame.»   I think those darker type songs will feel familiar.  But I have found Dommin fans to be pretty open to our coloring outside the lines of our genre.  I put up a poll on our website so they can make their voices heard about what they are enjoying the most.

— For your previous album, Rise, you had also put a poll on Dommin website, asking people to vote for their favorite song. «The winners» were ‘The Girls’ and ‘Falling Into Ashes’. Were you surprised by the poll results?

— No, it was not surprising. The reason for that particular poll was to see what songs we should focus on when it comes to making videos. We wanted to make sure we were making videos for the songs that people were most interested in. ‘Falling Into Ashes’ wasn’t surprising because that’s the song that is most like our older stuff, that’s more typical Dommin-type stuff. ‘The Girls’ is a poppier tune, maybe a more mainstream song, so it wasn’t a surprise people would gravitate towards that one as well. I think what surprised me more was some of them didn’t get as much interest. We thought ‘Manipulator Girl’ would go much higher up there but that one was pretty low.

«As a listener, I want to hear the most authentic real thing. It doesn’t always have to be sunshine and rainbows and life-affirming lyrics.»

More: Dommin fans prove they really care about the band

— Maybe it’s an indicator that fans are craving for more romantic stuff from Dommin…?

— I would say this album, Beautiful Crutch, is darker than Rise. It’s not as upbeat for sure. I would say it’s overall a slower album but the last song that we have on the album, ‘Outer Space’, is different than every other song on it. It’s a very uplifting kind of tune. The biggest influence on this song was Tears For Fears.

«I was at a place in my life where I thought, this is as far as I’m going to get. Things were not looking good. I was like, «That’s it. I’ve just got to quit music, go find some job I hate, and that’s going to be my life.»

— In June, you posted a video of you performing ‘My Reality’ from the album Rise with the original song lyrics, which the producers made you change later because they sounded «too depressing.» Do you often have to change the lyrics for your tracks?

— It’s not always going from negative to positive, from depressing to uplifting. There were songs that I ended up not putting on the last album, because when we were doing it, the producers tell me the lyrics of too smart. I just thought that was the dumbest thing I’ve ever heard. A lot of people in the industry are really appealing to the lowest common denominator, when it comes to music listeners. They are appealing to what they think are dumb people. They’re like: «They’re not going to get you, they’re not going to get what you mean».  It’s funny that of the songs they had an issue with was the song called ‘There you are’.

— Really? That’s one of my favorite songs on The Rise!

— Yeah, but when I wrote that song, they asked me at that time: «What does that mean «there you are»? I don’t get it.» You can’t run away from yourself, that’s what it means. It’s poetic. I didn’t think it was all that confounding. I don’t think it’s the best thing to appeal to the lowest IQ. You just have to be honest, you have to do what you’re doing. And if some people don’t get it, it’s okay.

— So what was «wrong» with the lyrics for ‘My Reality’?

— The first two lines were originally «I wake up every day / Knowing where I’ll never be». I was at a place in my life where I thought, this is as far as I’m going to get. Things were not looking good. I was like, «That’s it. I’ve just got to quit music, go find some job I hate, and that’s going to be my life.» That’s how I was feeling. And they thought, «Oh, that’s too down.» It happens quite a bit. Either the lyrics are too smart or they’re too depressing.  My thought is, as a listener, I want to hear the most authentic real thing. It doesn’t always have to be sunshine and rainbows and life-affirming lyrics.

— On your Facebook page you asked fans to share their thoughts on your 3-4 projects, which are basically the songs you write, categorized by several genres. Are you thinking of launching them separately from Dommin or gathering them under the same Dommin «roof»?

— Even though there is some diversity in the albums, Dommin is always going to be categorized as a rock band. And that’s the way that I see it. When you start writing a song, sometimes it’s just on an acoustic guitar. And the clothes that you put on it determine where it’s going to be. Sometimes if I’m writing something that’s more of a storyteller, maybe more folky, Americana or country is the clothes that it should wear. Certain sort of genres appeal to certain types of things differently.

— What sort of songs do you write that wouldn’t land on a Dommin album?

— I have songs that sound like 50s ballads, some of them are rockabilly, some sound dreamy, laid-back or acoustic. But they just wouldn’t sound right on a Dommin album. I think it would be just too much of a departure. I’ve always wanted to share them that with the world and see how people react to them but Dommin has been my one vehicle at the moment, so if it doesn’t fit the music that I’m doing, then it just sits on the shelf. And there’s just so much of it that I don’t want to put one song that’s weird on a Dommin album.

— Will it be just you or the whole band participating in those projects?

— It really just depends. Everybody in the band has their lives in what they’re doing. We all are Dommin and have been a part of it in some form. It’s going to be a matter of them wanting to. We’re not only bandmates, we’re really good friends and creative partners, so having those people along for a ride would be good. But I also understand if they’re like “I’m not really keen on this one” or “I’m busy doing another project”. It’s sort of up in the air.

SLIPKNOT impressed with Tallinn crowd: «Where the f—k did you crazy beautiful motherf—ers come from?»