Green Day’s movie Heart Like a Hand Grenade, directed by John Roecker, documents the most important period in the band’s discography — the recording of their American Idiot album, which made them a truly iconic punk-rock band, the status they have successfully kept to this date. The film also features a live performance by Green Day as they were in the process of preparing the release. 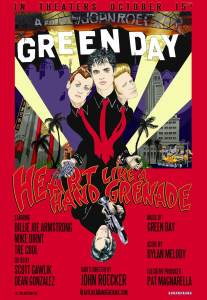 The world premiere took place on this past Thursday, October 8 at the 38th Mill Valley Film Festival and, as Loudwire reports, will be soon available for audiences everywhere. The highly anticipated documentary will be screened in U.S. cinemas on more than 135 screens starting October 15. The following day, exclusive Vimeo OnDemand release will be made available.

On November 11, the film will hit theaters around the world including Australia, Canada, the Czech Republic, Germany, Italy, Japan, Latvia, Mexico, New Zealand, Russia, Spain, the U.K. and Uruguay. And two days later, November 13, Reprise Records will launch digital purchases and a DVD edition of Heart Like a Hand Grenade.

The second news from Green Day this week is probably not less significant than the former for the music scene. Billie Joe Armstrong’s teenage son Jakob Danger (stage name) has been signed to Burger Records to release his debut EP. Here is what 17-year-old Danger said n a recent interview with NME about the music style of the upcoming record: “My two favourite bands are The Strokes and Beach Fossils—those are my two biggest influences. When it comes to the music and the guitar parts and bass, I like that style of music. I love the way The Strokes and Beach Fossils sound, so I wanted to see if I could write songs like that.» Listen to Jakob Danger’s recently released song below.

Green Day’s other son, Joey, is also signed to Burger Records as a drummer in Swmrs. Now the time has come for his younger brother to introduce his creative self to the world.

Watch the trailer for Heart Like a Hand Grenade movie below. Share your thoughts in the comments, and join Alterock Facebook and Twitter to always be in the know about your favorite rock bands!