If you regularly check out rock news, you probably remember that just a week ago, Disturbed frontman David Draiman made healines of most metal media for ranting at a female fan in the audience for texting continuously on her phone. The incident took place during the band’s show on March 23 in Dallas, TX, at House Of Blues. The woman gave an interview to the Dallas Observer soon afterwards, and explained she had a good reason to be texting, as she had to make sure her child had just gotten home in the midst of a terrible storm. In the light of the new details, Draiman has publicly apologized for his words. 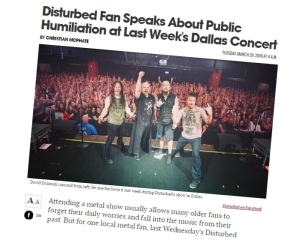 In the video from that show (below) Draiman goes on for at least a minute making it clear how rude it was of the fan to be texting instead of being involved in the show and paying attention to him. “Yeah, you, the brunette. Yeah. Hi, how are you? So what is so important going on in the world that you need to be texting the entire fucking show?” – the vocalist wondered.

Not only did the singer’s words upset the woman but she was also booed by most people in the venue, so she felt humiliated and left the show when Disturbed resumed playing. And as if the rant wasn’t enough, Draiman then took to Facebook to express his frustration about seeing fans stare at their phone during the show.

In the recent interview, the woman, Shannon Pardue, revealed that she also tried to shout to Draiman that it was not what he thought it was, and that she was reaching out to her kids. However, her explanation could hardly be heard because of the distance between them and the noise from the audience.

“Rock stars wouldn’t be where they are without people who come to pay for the show,” Pardue told Observer. “Whether I had my eyes on him or not, I am still there and I can hear them. He’s an amazing singer, and they were good, but it was just his attitude. I’ll never pay to see him again nor will my friends.” Many fans later voiced their support on social media.

The vocalist of Disturbed regrets having said all that without knowing the full context of the situation. “You know when I did what I did, it wasn’t me trying to push her away. It was a matter of me trying to engage her. It’s what I’ve done for years and in most circumstances if there is someone who is being passive.”

Now that Draiman knows the whole story, he says: “I feel badly about it and I am sorry. I can only say at this particular point that I think that that tactic may be something that I from here on out remove from my live repertoire because obviously there is the chance of me making that scenario happen again if I don’t have the information that would keep me from making that mistake. […] I never want anyone to leave one of our shows feeling badly. The whole idea is to pull them in and to make them feel empowered and sometimes you’ve got to be a little forceful when you do that and if she got rubbed the wrong way, that is something that I regret.”

You can check out the video of Draiman talking to the woman in the clip below and the transcription of his angry monologue underneath. What are your thoughts on the story?

“Oh, up in the balcony, what am I gonna do with you? Especially this one. Yeah, you, the brunette. Yeah. Hi, how are you? So what is so important going on in the world that you need to be texting the entire fucking show? The whole show! You’re right up front; I can see you clear as day. You’ve had your face in your fucking phone the whole goddamn show. Are we that boring?
Don’t tell me to go fuck myself; you already did by looking in your phone instead of paying attention.
I’m not wrong. Am I wrong? If you were up here and I did that to you, how would you feel? Seriously! It’s fucking rude. It is!
If you don’t wanna watch, don’t watch, but don’t stand there in front of the fucking stage in the front row of the balcony where everybody can see you texting the whole fucking time on your phone.
I’ll tell you what. Can I at least have your word that I will have your attention for the rest of whatever’s left of the set?
Now she’s all pissed off. She thinks that I did something wrong to her. I love it.
Welcome to the age of the Internet, ladies and fucking gentlemen.”