AlteRock called Otherwise frontman Adrian Patrick to ask him if the band was planning to tour Europe, about his personal free time activities + more

Otherwise have been rocking for more than a decade now and have proven to be not just one of the “hardest rocking” but also one of the hardest working bands in the industry, doing about a hundred shows almost every year. The group has also gathered a large fan base outside the States, especially with their latest, 2014′ record, Peace at All Costs. As Otherwise haven’t played outside North America yet, Alterock has decided to call frontman Adrian Patrick and ask him whether they are planning to tour Europe and other continents soon. From our chat with Adrian you will also find out why the rockers got a nickname “The Wise Guys”, which martial arts Adrian practices in his free time, and what was the weirdest thing he’s ever been asked to sign by a fan…

You’ve been touring like crazy. You played 83 shows last year, which is so far the record in your tour history. Was it initially planned to play so many or were some shows added?

Well, since we first started touring it’s been crazy. In the first album cycle for True Love Never Dies, we did 200 shows in 20-21 months! And with the last album, like you said, I don’t even know the numbers but it was nonstop over the course of the past year. My brother, who is a lead guitar player and my main songwriting partner, him and I are taking some time off the road now to write the third album. So I guess the extensive touring is never planned out that well but it’s always part of the plan. We know that we are going to have to hit the road hard and spread the message about our music out there.

How do you manage to be so far away from your family for several months? Do they ever get a chance to travel with you to some tour destinations?

You haven’t toured much outside North America. How likely is it that you’ll go on a European tour soon?

Well, we are hoping for the third album release. Even though our record label Century Media was based in Germany, we didn’t get to play in Europe at all. We did a couple of shows in Canada, which was awesome but I would like to tour in Europe first for this third album: I’d like to start the cycle out there and then come back to the States. It would be nice to break some new ground, as long as we get the right push and we are able to market and promote the next album correctly. Once the European community sees our live show, I think they’ll become “believers” (laughs).

Now to a less serious question: during 2015’ tour or earlier, what was the weirdest place you’ve ever put at autograph on?

Wow, that’s impressive. From the feedback you get from other countries, where else in the world do people connect to Otherwise music most? 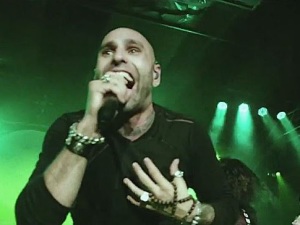 In social media I’ve seen a lot of messages from people in South America. Besides Europe I think would like to get down to South America and do it as soon as possible. We’ve toured extensively throughout the United States, so it’s time to get out to other places. You know my brother and I we are half Indian, our mother is Indian, and I would love to go to India and play out there.

Can you already say when the third album will be released?

I don’t have exact dates for you but I want to say that it’s most likely going to be a Fall release, sometime in either September or October, I would guess.

Will there be any collaborations on the next record?

We will definitely be doing some collaborations and some co-writing. I believe that you can find the lightning in a bottle, you never know where a lightning will strike. You need to get out of your comfort zone, get out of a standard way of thinking and expand your musical and creative variety a little bit. It’s just a good exercise and artistry and creativity.

Is there anyone in particular you’d love to make a song with?

My brother and I, we found ourselves in a really good spot creatively. Now we’re doing it on our own, at our own pace and we’re really being patient. Our last two albums were rushed in the sense. With this one, we’re going to take our time and do it on our terms. One of my favorite songs off the album Peace At All Costs is called “Meet Me In The Dark”, and we wrote that song with Brandon Saller from Atreyu. He is one guy that we would definitely like to get back with. We’ve been trying to get our schedules lined up for the past couple of months.

And when did media start calling Otherwise “The Wise Guys”?

It’s a sort of our fans’ nickname for us… We’re kind of smart asses sometimes, we like to crack jokes so… (laughs)

Over all these years as a band, you’ve been through a lot and learned many lessons. In what ways do you think you’ve become wiser guys?

(laughs) Oh man! It’s a really good question. I would say… The way that we’ve become wise is that we realized that we can always trust ourselves. My brother and I, we can trust each other but the bottom line – we have to trust ourselves, because to get the job done you’re relying on people – on your advisors, on your band mates. We got wiser in the sense that we want to accept full responsibility for everything we do.

And what would you say is your biggest strength as a band?

I believe, in our honesty. We are really genuine. We’ve learned a lot about this industry: there are a lot of people who ACT, they’re just an act. But for us it is not just an act, it’s a way of life. What you see is what you get. It’s your greatest strength but it can also be your greatest weakness.

In one interview you said that money and possessions don’t matter to you. Have you ever had to work full-time, doing some job not related to music?

Yeah, the year before we signed a record deal I was working in a landscape company: I was mowing lawns, planting trees, and pulling out weed. That was not fun. Now my brother and I live very humble. Even though the financial state of most rock’n’roll is tough right now, we’re still able to survive, eat well, have a roof over our head, so we are very lucky in that respect.

You started as an unsigned band and managed to achieve a lot before you signed any deal. There are many young bands trying to do the same, without any record deal. What advice would you give them?

Yeah, music is so subjective, it’s based on people’s opinion. Everybody has their own interpretation. It’s a very nebulous industry you’re trying to break into, but you have to know that your music and your songs are not shit, that they are good, they are worth to be listened to.

While watching your performances, I’ve noticed that they all shape a very solid image of you and as you said, complete strangers start to feel like they know you based on this image. What do you think is the biggest misrepresentation of you in the media or by fans? 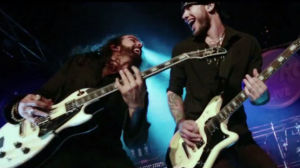 Well, I think that in some of those videos and some of those images… we’re very intense, I guess – we’ve been told that – in all aspects of human condition and emotion. I think sometimes we look a little scarier than we really are (laughs). But we actually also do a lot of stuff acoustically and we’re not always like that. I think a good portion of our image that is out there makes us look very aggressive. We are aggressive but we have a soft side too, you know (laughs).

Should you fans learn anything about you that they don’t know yet?

Well yeah, I would say that sometimes I cry in movies. Even though I’m trying not to (laughs).

So which was the last movie that made you cry?

You know, funny enough, I’ve just watched the reboot of Robocop, and there is a scene where he is with his little son, and that kind of choked me up a little bit. I guess that now that I’m a dad, those kinds of imagery and scenario get to me a little bit more than they did before.

Yeah, you know, my brother and I, we are trying to stay as healthy as possible. We do boxing, kickboxing, jiu jitsu… We got back to yoga recently. As I said, my son was born just a little bit over a year ago, and he has definitely become my favorite hobby and my favorite pastime.

Thank you very much, Adrian. It’s been a pleasure chatting with you.

Alterock is grateful to David McDonald and Concrete Management for helping us arrange this interview.

[schema type=”review” url=”http://alterock.net/interview-otherwise-2016/” name=”Interview with OTHERWISE: ‘For us it’s not just an act, it’s a way of life'” description=”Otherwise have been rocking for more than a decade now and have proven to be not just one of the “hardest rocking” but also one of the hardest working bands in the industry, doing about a hundred shows almost every year. Alterock has decided to call frontman Adrian Patrick and ask him whether they are planning to tour Europe and other continents soon. ” rev_body=”From our chat with Adrian you will also find out why the rockers got a nickname “The Wise Guys”, which martial arts Adrian practices in his free time, and what was the weirdest thing he’s ever been asked to sign by a fan…” author=”Tatiana Vinichenko” pubdate=”2016-02-04″ user_review=”5″ min_review=”1″ max_review=”5″ ]