Fans at the Ronquières Festival in Belgium got a special treat, a rock’n’roll version of “bury a friend“

Eurovision 2021 winners, Italian nonconformist rockers Måneskin have surprised the Belgian crowd with a cover of Billie Eilish’s song “bury a friend“. And the rock‘n’roll take on it sounds so natural and anthemic that even Billie probably wouldn’t expect it.

Last weekend, Måneskin were performing at Ronquières Festival in Belgium, when the audience heard the vocalist Damiano say:

“OK, guys, now we have a little surprise for you. We’re going to play a song from a great, great artist. So, Billie, if you’re watching call us.”

And you know what? If we were Billie, we wouldn’t hesitate to call this powerhouse of a band. Watch their energetic rendition of “bury a friend” below:

Måneskin took the world by storm after taking the trophy of Europe’s most awaited song contest Eurovision. On May 22, the ambitious young band single-handedly proved that Eurovision Song Contest isn’t all about pop, unicorns and rainbows. Shaken by the pandemic, European audience craved for something groundbreaking, earth-shattering and non-cliche.

Having won Italy’s most prestigous Sanremo music festival, Måneskin went on to conquer Europe with their turbulent track “ZITTI E BUONI.” Apart from charismatic frontman Damiano, the band is represented by bassist Victoria De Angelis, who has Swedish roots, as well as guitarist Thomas Raggi and drummer Ethan Torchio.

The band’s victory at Eurovision 2021 was tarnished by rumours that the flamboyant lead singer was sniffing some drugs during the announcement of the Europe’s voting results. The offended singer then took the drug use and was tested negative, which put an end to the ongoing speculation. “No drug use took place in the Green Room and we consider the matter closed”, stated the Eurovision Broadcasting Union (EBU).

Måneskin’s win also means that next year’s song contest will be held in Italy. Which Italian city gets to host the 200-million-viewer TV event, shall be announced at the end of August. Remind yourself of the band’s victorious Eurovision performance below:

What do you think of their performance of “bury a friend”? Do you want quality music news and interviews? Go ahead and join us on AlteRock Facebook and AlteRock Twitter! 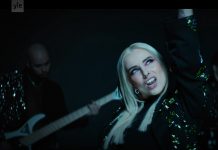 Interview with CYAN KICKS (UMK 2022): “We just keep on pushing no matter what comes our way”