The band is working on their eighth full-length album “F.E.A.R.”, which will be released on January 27, 2015. The abbreviation in the title stands for “Face Everything And Rise”. The recording is being done in the “vicious” city of Las Vegas, where the musicians are doing the recording with producers Kevin and Kane Churko.

As Papa Roach vocalist Jacoby Shaddix put it in the recent interview for Artisan News: “It’s large, it’s bombastic, it’s in your face. It’s like a big woman smothering you with her boobs. It’s kind of like that; it’s in your face, and it’s just right there.”

He says the new producers saw their music from a new angle and added their vision to the sound. “I think that they both challenged all of us as writers, as well as we challenged each other in the writing process on the record”, Shaddix comments. The band said the new album is about becoming better and stronger people. 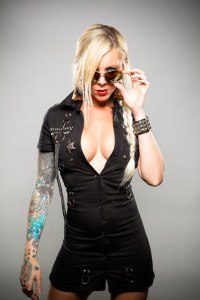 The new album will also feature Maria Brink of In This Moment as a guest singer. The two bands just happened to record in the same building, so at some point Papa Roach just happened to have a chat with their next door neighbor and offered her to sing on “Gravity” with them.

The first video from the upcoming album,”Face Everything And Rise” (watch below) was created in Las Vegas, too. But the band insists, there isn’t much partying this time and lighting the fires of the big city. “We all went there consciously knowing that we just wanna focus on the music, Jacoby says. “I think if we made that record in Vegas ten years ago, I don’t know if we would have made it out alive, to be honest. So I think we went there at the right time.”

Watch the Artisan News interview below.