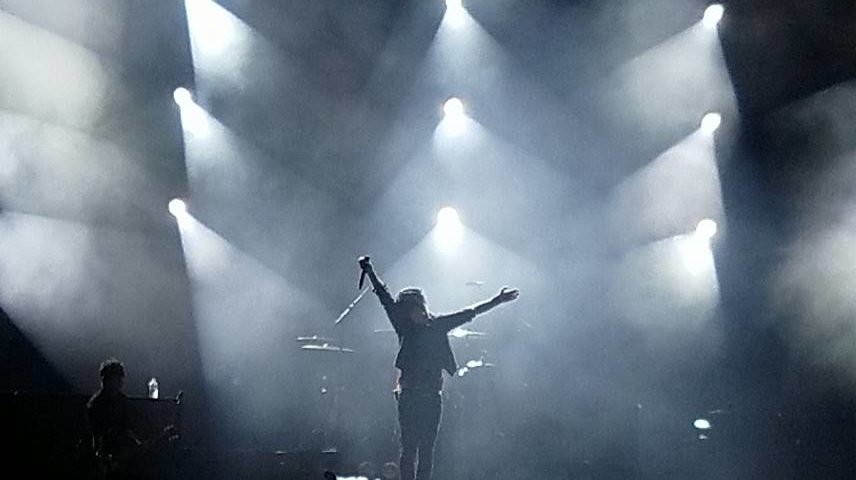 «If we had known prior to our performance we most likely would not have played at all,» comment Green Day

This past Friday night (Jul 7) saw the last show of Green Day’s European tour and a horrific accident right before the band got on stage. Prior to the group’s headlining set at Mad Cool festival in Spain, acrobat Pedro Aunión Monroy died in an aerial performance after falling over 100 feet from a suspended box he was doing the tricks in.

The acrobat was performing stunts in a small cage above the crowd of 35,000 to the Prince track ‘Purple Rain’. He was secured with a harness around his waist and it all seemed good when it supposedly snapped, letting the artist fall 30 meters to the ground. You can watch the video footage of the accident at this location.

According to Independent, when the 42-year-old performer fell down, paramedics rushed to the scene, but Monroy did not survive the fatal injuries. «There was a lot of confusion and initially people thought it was part of the show,» one festival goer said (via Mirror).

Spanish newspaper El Mundo reports that Green Day show was delayed for about 30 minutes as police consulted with festival organizers whether to allow Green Day to take the stage, following the tragedy. There were, reportedly, «arguments» between members of staff before it was decided the band would do the show anyway.

Following the accident there was a huge backlash from the audience at the event organizers and band management, insisting Green Day shouldn’t have played afterwards. Festival goer Javier Erquiaga tweeted Green Day saying: «ashamed of you. An artist died just 20 meters from you and you still play. Worst band on the planet».

Some of those who witnessed the fatal accident left the festival grounds, shocked by the decision to let the festival program go on. British actor Adrian Randle who attended the event wrote: «I couldn’t in good faith stay to watch Green Day perform after that.»

The story has been updated since, with Green Day’s singer Billie Joe Armstrong posting an official statement on the accident, reading that the band had not been told about what the acrobat’s death before taking the stage. Had they known about the tragedy, they «most likely would not have played at all,» Armstrong adds.

Green Day’s frontman points out that «15 minutes prior our tour management was told by local authorities to wait to go on stage because there was some sort of security issue.» The band had little idea about the acrobat’s performance at all and what occured during the act. «Security issues are a normal occurrence and procedure at any show.. we were NOT told why which is also normal. we waited as we were instructed.

Read Armstrong’s full statement and let us know what you think:

Last night at the Mad Cool festival in Spain there was a horrific accident. An acrobat by the name of Pedro was killed during his performance before Green Day played our show.
We are so sad for Pedro and his family and we pray for them in this time of grief. I can’t imagine how much suffering the friends and family are going through.
Many of you are wondering why we continued to play our show after the accident.
Green Day did not hear about the accident until after our show was over.
We didn’t even know there was an acrobat performance at all.
these festivals are huge.
There are so many things happening at the same time it’s impossible to keep up with every performer/artist..
We were in a back stage compound about a half mile away from the main festival stage. We were warming up ready to go at 11:25 pm.
15 minutes prior our tour management was told by local authorities to wait to go on stage because there was some sort of security issue.
Security issues are a normal occurrence and procedure at any show.. we were NOT told why which is also normal. we waited as we were instructed. Still, We had no clue there was any such accident.
We were given the ok. The band jumped into vans and drove to the main festival stage.
This was to be the last show of our European tour and we were all so excited to play our hearts out one last time.
We were on stage at around midnight and played around two and a half hours. Everything seemed normal. the crowd and fans had a good time. We got off stage and drove back to our artist compound.
It was there when we were told the shocking news about Pedro. All of us were in disbelief. I don’t know why the authorities chose not to tell us about the accident before our concert. All we know is what was said after our concert.
This has never happened in the 30 years Green Day have been performing live.
If we had known prior to our performance we most likely would not have played at all. We are not heartless people. The safety and well being at any of our concerts absolutely comes first.
What happened to Pedro is unthinkable. Once again we are heartbroken for his friends and family. and we are also shocked and heartbroken for anyone that had to witness this tragedy.

It is worth noting that Mad Cool Festival is one of Spain’s largest festivals with the audience of 100,000 attending over three days last year. Besides Green Day’s set, this past weekend the festival stage hosted the shows of Foo Fighters and Kings of Leon.

AlteRock sends condolences to Monroy’s family and friends and to all those who witnessed the horrific accident. Be the first to leave your comments and stay tuned with AlteRock Facebook and Twitter.

Read more: Fan dies after falling down and landing onto metal rods with his chest at Chevelle show