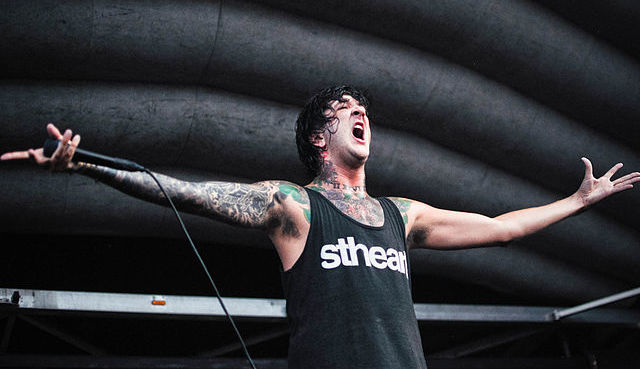 The past two years have been extremely tough for Austin Carlile. No one would wish for their worst enemy as many surgeries and complications as Of Mice & Men frontman has to suffer. Over the weekend, the singer took to Twitter to post a few important updates on his health.

Of Mice & Men were bound to cancel the rest of their European tour, as Carlile had to go back to hospital for multiple surgeries and could not physically go on with the trek. In the updates, the singer shared some details of the medical procedures he’s currently going through.

Carlile’s post as of October 21 said he had the first of a few surgeries, the procedure called blood patching in order to «fix the three major tears» in his spine. The following post revealed that the surgery was successful, and the only thing the singer needed afterwards was resting and sleeping.

But that was just the first step of the way. Carlile wrote that on Monday or Tuesday the doctors will move on to fixing the other tears in his low spine, base of neck and head.

To support Carlile through this and make his stay at the hospital less boring, his mates from Linkin Park and DC Comics have sent him a lot of gifts, which you can see in the Instagram posts below.

Have you sent the singer any message to cheer him up during his hospital stay? What exactly did you write? Be the first to leave your comments and stay tuned with Alterock Facebook and Twitter to never miss on the news about your favorite alternative music!

First of a few surgeries today!!! Will be doing something called blood patching, to fix the three major tears currently in my spine…

First procedure was able to fix one of the tears in my mid-spine caused by a bludgeoned disc tearing through the dural encasing it, now I’m

recovery & resting plus A LOT of sleeping. God has a purpose for me in this & I will fight through it with Him no matter how long it takes.

waiting for it to heal the see the results & move on to fixing the other tears in my low spine & base of neck/head Monday or Tuesday. More

Aside from my heart surgery 5 years ago, I’ve never had to endure something this gnarly. Thank you to all of you for the immense support <3

THANK YOU @linkinpark!!! Some hospital essential reading, day four being in here already!

Jill, Paul, & everyone else at @dccomics THANK YOU!!! You know me so well… The hero’s YOU ALL created, help create who I am today. So really, thank you. Can’t wait to work together again in the future! /// «Life is locomotion. If you’re not moving you’re not living. But there comes a time when you’ve got to stop running AWAY from things and you’ve got to start running TOWARDS something. You’ve got to forge ahead. Keep moving. Even if your path isn’t lit TRUST THAT YOU’LL FIND YOUR WAY.” /// x