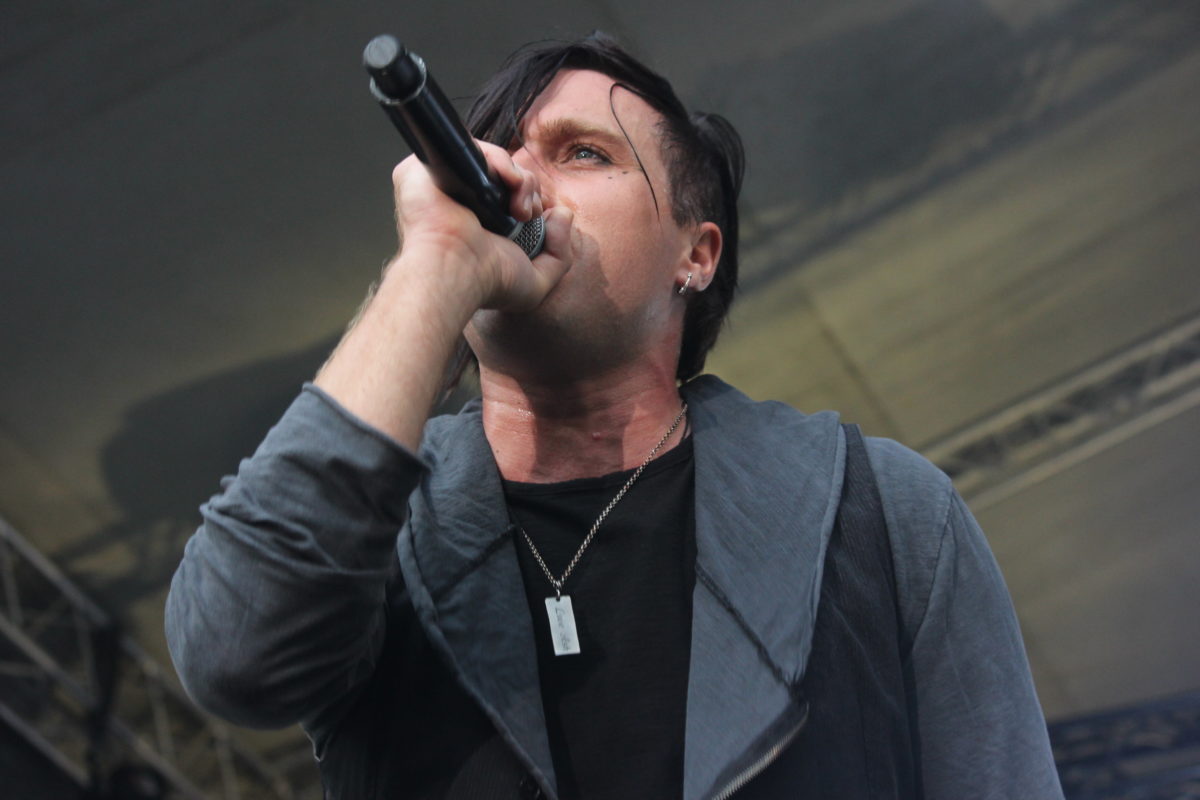 The ruins of the medieval catholic monastery Pirita Convent might have been the most picturesque piece of architecture Three Days Grace ever got to perform in. The band were truly amazed by the location and the white nights in the Northern capital last night, so they gave it their all on stage.

[quote align=”center” color=”#COLOR_CODE”]“Look at this! It’s f–ing beautiful!” – Matt Walst and his band mates couldn’t believe their eyes, performing on stage right on the ruins of St. Birgitta. “In Canada, where we live, we don’t have anything like this. You are lucky… And we’re lucky to be here with you!”[/quote]

The show was part of the bigger Sunset Festival, which will also host The Naked and Famous and The xx in varios venues of Estonia’s capital. Tallinn met Three Days Grace crew with a grey sky and drizzle and the day didn’t promise much sun for the rest of the day. But as the day progressed, miraculously, the clouds gave room to a sunny evening, making the view of the ruins stunning.

Three Days Grace were warmed up by two rather energetic acts: Estonian rock band Psychiatric Ward and Italian guys from A Crime Called. The Psychiatric Ward knew how to engage the audience: they made their hard-hitting set an easy listening and encouraged the crowd to scream along. It was clear from the start, the night was going to be a blast. They were soon followed by A Crime Called, which brought a heavier, darker sound with them and ended up being called for an encore (which happens rarely with warm-up acts).

When Three Days Grace came up on stage, the fans were more than ready for some jumping to ‘The Good Life’ and the like, because a typical Estonian summer evening rarely makes it to +15 degrees, and the venue located a few minutes walk from the Baltic Sea surely needed some raw drive.

By tradition, TDG started off with one of the strongest tracks from the latest album Human, ‘I Am Machine’. This catchy piece has proven the right choice for the tour: the Russian/Estonian crowd sang along to ‘I Am Machine’ as strongly as to TDG’ earlier hits. The band then took it back to the roots, to 2003′ angry tune of ‘Just Like You’, which the band’s new vocalist, Matt Walst, nailed hands down. However, Matt’s loud “I want to see you mosh” didn’t have any effect, either for the culture-specific quiet and polite nature of local people or out of respect to the medieval monastery (which is already in ruins, haha).

The following ‘Chalk Outline’ off the last Adam Gontier-led album, Transit of Venus (2012), and ‘Home’ from the debut self-titled record (2003) needed a bit more raw, in-your-face delivery of the original but a rare surprise that awaited the crowd afterwards made it forget these nuances.

“You know, sometimes you’re in love with someone. But then you don’t want to be in love with them but it keeps coming back to that person over and over”, intrigued us Matt and guitarist Barry Stock led in to the rarely performed ‘Over and Over’ from album One-X. You won’t find this song in the band’s regular set list since Matt took Adam Gontier’s place, so for the fans it was a precious moment in the show… just like for the band members.

Of course, the show couldn’t pass without the fans’ recent favorites – simple and catchy ‘Painkiller’, life-asserting ‘Break’ and a let’s-jump tune ‘The Good Life’. But there was also room for a couple of deeply emotional songs from the most acclaimed record One X, including ‘Time of Dying’, a special treat ‘Never Too Late’ and the most anticipated ‘I Hate Everything About You’.

Although I must say, if you’ve seen TDG live a few times, you would have been a bit dissapointed by Matt always owning the mic, even in the “epic” moments. For one, he didn’t let the audience shout “I hate”, “you hate” in the culmination of the straightforward hit. Same with the iconic ‘Animal I Have Become’, which simply asks to be thrown back to the crowd for “So what if you can see / The darkest side of me…”

The drum solo by Neil Sanderson in the middle didn’t leave anyone indifferent, as he was pounding on the drums fiercely in the standing position (to make it as loud as possible). The tour keyboardist then picked it up with a semi-classical piano tune which smoothly led to the touching acoustic ‘The Real You’.

When the guys from TDG returned for an encore, they decided to go out of their own comfort zone a bit and finish up with a rather depressive 2003′ piece, ‘Burn’. Not that the band never plays it – you might catch it live here and there, but it’s definitely new to the encore. By all means, the crowning song of the night by tradition was ‘Riot’. The delivery was so massive that it kept many fans glued to the stage, chanting ‘Three Days Grace’ long after the gig officially finished.

Despite the cold July evening and small sound issues on the way, it was a magical evening in the most atmospheric surroundings with one of the most dedicated bands in the alt-rock scene.

Check out AlteRock gallery from the show in Tallinn below. Do you like what we’re doing? If so, help us grow by sharing the article – this way we can keep providing you latest news and fun interviews with your favorite bands! Stay tuned with AlteRock Facebook and Twitter to never miss on the news about your favorite alternative music!