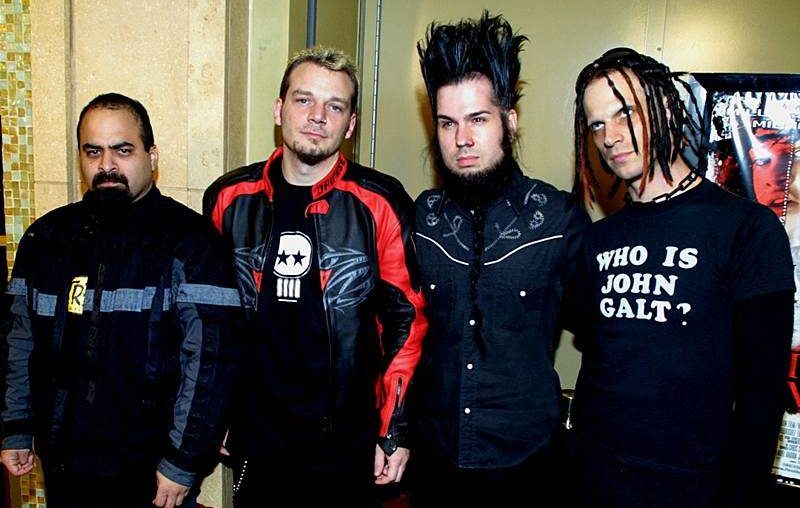 While the loyal Static-X army of fans cannot wait to see the release of Project Regeneration, the first new Static-X album in a decade, ex-guitarist Tripp Eisen is bringing out a legal dispute with the the band members. Eisen accuses his ex-bandmates for alteration of the last recordings of Wayne and calls them “a bunch of guys riding on the back of Wayne’s memory and his music, as well as mine”.

What led to such a strong dispute?

Since Wayne Static passed away almost five years ago, the band have been in works on the new release, album Project Regeneration. The group officially dismembered in 2013 and this record would mark Static-X’s first new album in almost a decade. The band’s original lineup — bassist Tony Campos, drummer Ken Jay and guitarist Koichi Fukuda — had a reunion shortly after Wayne’s passing and planned to honor his life by the release of Project Regeneration, featuring Wayne’s vocals on previously unreleased songs.

Apart from putting together the last recordings of Wayne, during the recording sessions for Project Regeneration, the band stated that one of its producers uncovered several additional unreleased and unfinished tracks. The album release date was postponed and the ex-members of Static-X started working closely on the just-discovered tracks with Wayne’s isolated vocals.

Today, Tripp Eisen (real name Tod Rex Salvador) released a statement disputing with the Static-X members over the rights to the recently added songs to Project Regeneration. He claims it was thanks to his initiative that Static-X members managed to have a reunion and objects to, quote, “being diminished”, as “these Wayne/Tripp songs are being bastardized.” Eisen believes the songs about to be released are from his “era of Static-X” and it’s not legal to alter them without his consent.

Here are the main fragments from Eisen’s statement:

“My former band STATIC-X have delayed the release of their first new album in 10 years due, in large part, to my involvement with and legal claim to 12 songs that feature Wayne Static’s isolated vocals. They are all from my era of STATIC-X.

“I have reached out to Tony Campos on many occasions to help the upcoming album ‘Project Regeneration’ reach the fans but he has been inconsistent and has shown arrogance to any successful resolution of my concern that fans won’t get to hear the fantastic work Wayne and I put into our mutual compositions.

“The 12 songs with Wayne’s vocals have no songwriting from any of the other members of STATIC-X. I am the only person that collaborated with Wayne on these songs.

“Tony told me they were altering the songs Wayne and I wrote together and I’ve actually heard the full altered songs, because I was in the loop until March of this year. This doesn’t amount to minor tweaks like bands do in the studio, which would not compromise the final product and harm a songwriters’ claim to their own music: It violates the intellectual property of a ‘joint work’, or collaboration. It amounts to band members, who had nothing to do with the songwriting, altering its composition without consent. They’ve changed not only my riffs, but also Wayne’s!

“I believe this is unfair to the fans and lacks integrity. But it also violates Wayne’s memory.

“I was involved in the writing of every one of the 15 or more songs that began this project, which includes the song ‘Road To Hell’. I also played all the guitars on the ‘Wisconsin Death Trip’ remake songs. I worked with Tony for a year until the project evolved into the ‘Wisconsin Death Trip’ anniversary tour and the ‘Project Regeneration’ album. Then I continued to work behind the scenes and on the songwriting. I was the one that made Tony aware of the three leftover songs from the ‘Start A War’ album, ….and they were finished mastered songs, not unfinished demos.

“There is a lot more to the story about ‘newly discovered’ Wayne vocals from ‘damaged tapes’ with ‘little or no music’ on them.

“It’s a lot to take in, right? It’s all true and I have it documented.

“In March of this year I was invited to play on the new album, but turned it down due to this controversy. Tony even told me to my face earlier this year: ‘you’re part of the family’ and I was happy to hear that and things were moving in a positive direction. They had my back and believed in me. But now they are attempting to minimize my part and contributions. But worst of all they are altering songs that Wayne and I wrote.

“I am happy to see the ‘Wisconsin Death Trip’ album and Wayne’s life celebrated, and do not want to take anything away from that at all. But I got this project going, and now I’m being diminished and these Wayne/Tripp songs are being bastardized.

“I considered Tony, Ken and Edsel/Xer0 as friends. But now it feels like a bunch of guys riding on the back of Wayne’s memory and his music, as well as mine. Plus they are revising history in an attempt to market the band and maintain control of this false narrative. Most of what they state in their press releases are out-and-out lies or distortions. It’s really unnecessary.

“Is it that hard to be fair and honest?”

You can see the complete version of Tripp’s statement at this location.

The news of Eisen’s reunion with Static-X to work on the new record wasn’t welcomed by many fans, as back in 2005 Eisen was excluded from the band for sexually assaulting two underage females. When a fan on Instagram asked if it’s true that “a known sex offender” was going to work on on the band’s new album, the band responded sharply:

“Listen! Let me make this very clear. Wayne, Tony, Ken and Koichi are the ORIGINAL line up of the band and we are celebrating our 20th anniversary & memorializing our friend Wayne!!! The 3 of us and Wayne are the TOTAL focus of this album and this tour. That guy was in static x for a couple years prior to HIS OWN personal troubles. His issues have NOTHING TO DO WITH US!!! … He was a co-writer on songs with Wayne & the band in the past. Some of those old songs ended up being tracks that Tony and the producers recovered some of Wayne’s unreleased, isolated vocals on. Those isolated vocals have never been heard and they are very special and some of the final pieces of art that Wayne left behind.

“Clearly, the guy you mentioned is promoting his new band by mentioning his PAST involvement with Static-X and he is attempting to gain credibility through his PAST association. Tony, Koichi and ken entered the studio together, along with their touring vocalist ‘xer0’ and they have been working diligently to craft some amazing music underneath Wayne’s unreleased vocal tracks. Tony, Koichi, Kenny, and xer0 are the only people participating In the recording of this new album. Aside from Wayne’s vocals and a couple guest vocalists, NOBODY ELSE is involved in the recording and production of his album. Tony, Ken, Koichi and touring vocalist ‘Xer0’ are the only people that have been in the studio recording and working with the bands original producer Ulrich Wild on this incredibly special new album. End of story.”

Who is right in this dispute?

Quite harsh statements on both parts, right? If the recovered old songs really are indeed “Wayne/Tripp songs”, the ex-guitarist is surely entitled to object altering songs he had contributed to. Besides, “that guy was in static x for a couple years” is quite an understatement. Eisen was an essential part of the band over their peak years from 1999 to 2005.

Tripp joined Static-X in 1999 and recorded three albums with Wayne & Co., including the most melodic Static-X album Shadow Zone (‘The Only’, ‘New Pain’), where Eisen wrote about half of the songs with Wayne.

We’ll remind that Wayne Static died after mixing powerful prescription drugs with alcohol, according to the coroner’s report. The 48-year-old singer was found dead in his apartment in Landers, California on November 1, 2014.