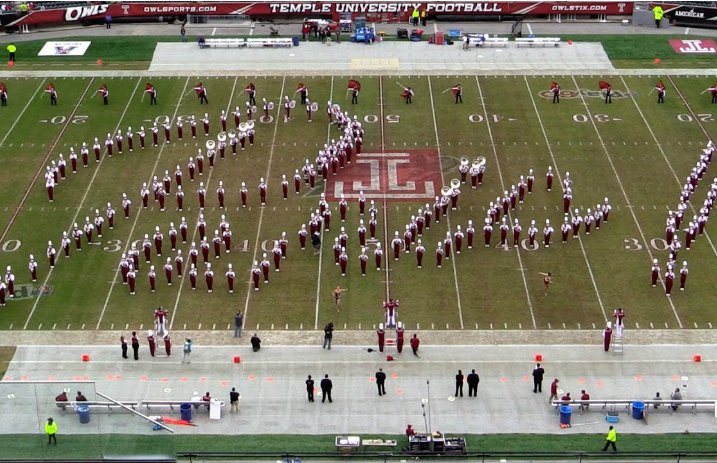 The Temple Marching Band have already established themselves as impressive synchronized show group, carrying out their halftime performances to up-to-date “student-friendly” songs. The outfit had already treated us with their numbers to Twenty One Pilots and The Killers, and for this week they’ve chosen to render Panic! At The Disco songs (see below).

Watch: PANIC! AT THE DISCO Advise to Think Twice Before Sleeping with Strangers in New Video

Panic!’s old and new hits were put together in an 8-minute medley, pulled out by hundreds of Temple University musicians, cheerleaders and other dancers. The group skillfully marched from one formation to the other with every new song and change of tune, while playing Panic!’s fans’ favorites. Hats off to the band! They’ve absolutely killed it!

The troop started off with Panic!’s ‘This is Gospel,’ which featured a lot of changes in formations, then moved on to the recent hit ‘Don’t Threaten Me With a Good Time,’ and crowned the show with the band’s classics ‘I Write Sins Not Tragedies’ and triumphal ‘Victorious’, which saw the band not only play and march but also do a little dance routine individually and in pairs.

Sure, it could not leave Brendon Urie and his mates indifferent. The singer immediately shared the video on his Twitter page. Check out his message below.

Enjoy the marching band’s entire performance below, and tell us what you liked or didn’t like about it.Be the first to leave your comments and stay tuned with Alterock Facebook and Twitter to never miss on the news about your favorite alternative music!