It was one psychedelic Late Night experience!

According to Stereogum, the band recently cancelled a couple of shows because frontman Grian Chatten had laryngitis. But the musicians couldn’t pass on an opportunity like this to play on American TV, even though Chatten might have still been sick on the night of their Late Night appearance.

The latest record revolves around the topics of understanding your mission on this planet and dealing with pain. Fontaines D.C. wrote the album on the road to London. The band’s vocalist Grian Chatten told Alternative Press the name of the record, Skinty Fia, is an Irish phrase that stands for “the damnation of the deer”. He went on to explain:

“There’s a slight level of discomfort in being Irish in this cыity. You’re reminded that you’re not where you’re from on at least a weekly basis. And we still hear the odd [derogatory term] ‘Paddy’ being thrown around. A few of my mates have been told to fuck off home and things like that. [Sometimes] it’s a lot more subtle… microaggressions and stuff like that.

But in a way, things like that gave us the impetus to really bring our third album over the line. We could easily have written an album without having anything to say because we just love writing music. But I think it’s really important to make sure that we do have something to say. [Being in London] made us want to change things as we saw them. It also made us covet and idealize and grow closer to our own Irish identity as well.”

Watch Fontaines D.C. performing ‘Nabokov’ live on the stage of Late Night With Seth Meyers below and tell us if you agree the live performance came out pretty psychedelic: 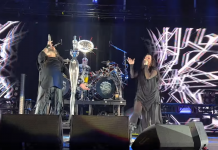 Must-see:Amy Lee of EVANESCENCE joins KORN on stage for ‘Freak on a Leash’