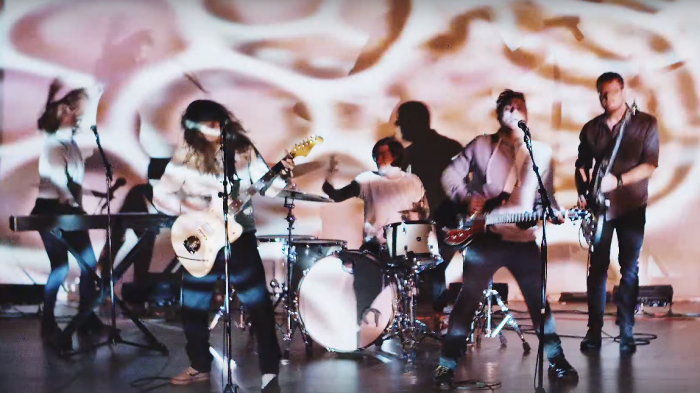 Frank Iero And the Future Violents have dropped a really emo/punk-driven music video for ‘Young And Doomed’. The song, which has clear references to My Chemical Romance, is the debut single from their upcoming album, Barriers.

Besides Frank Iero himself, in the video you’ll see his friend Evan Nestor, former Murder By Death bassist Matt Armstrong, multi-instrumentalist Kayleigh Goldsworthy from Dave Hause And The Mermaid and drummer Tucker Rule from Thursday.

Directed by Steve Pedulla, the video is full of no-mercy blinking colors and the intense expressiveness of emo era – just when you thought emo-rock is gone for good.

And Iero doesn’t deny both musical and lyrical references at My Chemical Romance’s legacy. For one, he shared the lyrics to the song on Instagram, where fans quickly spotted the line: “I’m not okay… oh wait, that’s the other guy.” Needless to day, ex-MCR fans immediately saw its link to the band’s ‘I’m Not Okay (I Promise).’

Watch the video for ‘Young And Doomed’ below and tell us in the comments if you feel the influence of My Chemical Romance in it too. And stay tuned for Frank Iero’s new album Barriers coming out May 31 via UNFD (preorder it here).

Frank Iero And The Future Violents have a very concert-filled spring and summer this year. They’ll first tour as support for Taking Back Sunday, starting March 25 in Houston, TX. Then, at the end of May, Iero & Co. will embark on an East Coast tour leg. Check out a full list of dates below and get your tickets here.

We can’t wait to see your comments below! And if you still haven’t, be sure to join Alterock Facebook and Twitter to stay tuned for rock and metal news.