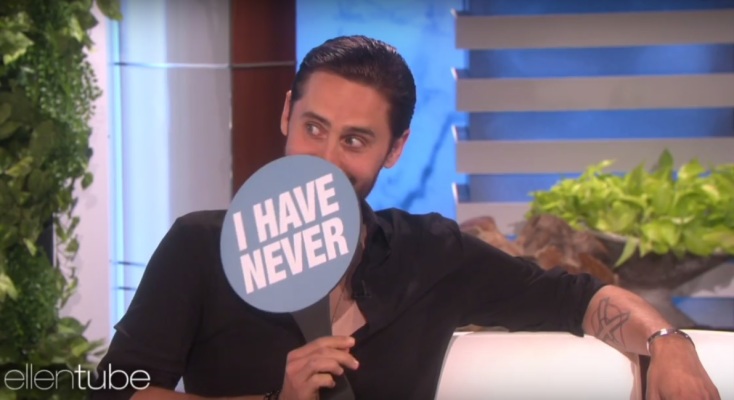 You don’t want to miss it: yesterday Ellen Degeneres had very important guests: Jared Leto and Canadian superstar Drake visited the show to play the game ‘Never Have I Ever’ on the talk show. Leto was the first one to be interviewed by the talk-show host, writes NME, and rapper Drake joined later to play the revealing game. Watch the video from the show below.

In the course of the game the singers had to answer some very straightforward questions of a personal nature, such as, “Have you ever hooked up with a fan on tour?”, “Have you ever texted a nude selfie?” Check out Leto’s confessions below and be sure to leave us your comments.

Jared Leto will soon appear on the big screen in the highly anticipated role as The Joker in Suicide Squad. Besides the 30 Seconds To Mars frontman, the cast includes Will Smith, who will play Deadshot (Batman), Tom Hardy, who will take on the role of the group’s leader, Rick Flagg, and The Wolf Of Wall Street star, Margot Robbie, who will play Harley Quinn, Joker’s girlfriend. The film is due out August 5.