Would you enjoy A Star Is Born even more if the film songs were Korn hits instead?

At the recent 91st Oscar ceremony the film A Star is Born with Bradley Cooper and Lady Gaga took home the award for Best Song. “But wouldn’t Korn songs make the movie even better?”, thought Korn fans and filmed an amateur (yet hilarious) trailer for A Star is… Korn.

Driven by enthusiasm and love of Korn’s music, Anna Salinas & Heather Alarcón Higginbotham have recorded a parody trailer of A Star is Born. As you can imagine, this time it’s not Gaga’s character to rise to fame but Korn vocalist Jonathan Davis.

The clip mirrors the original movie somewhere up to the middle, and the two girls even whisper the same words to each other as in the Oscar-nominated film. But it takes quite a drastic turn when the shy but eager for performing “Davis” gets invited onto the stage.

Be sure to watch the trailer for A Star Is Korn below. What do you think of the parody? Shall they choose another star to be “born” in their next parody trailer?

As to the just-finished Oscar ceremony 2019, it shocked quite some fans. Despite having boasted eight nominations, the trophy was given to A Star Is Born only in one category – Best Song. Which means, Gaga didn’t get the Best Actress award, and neither did Cooper as the Best Actor. In probably the most important category of the night, Best Picture, the award also passed the Cooper-Gaga creation and went to Green Book.

Share your thoughts in the comments, and join Alterock Facebook and Twitter to stay tuned for rock and metal news. And check out Lady Gaga’s Oscar acceptance speech for ‘Shallow’ below: 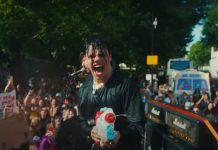 YUNGBLUD doesn’t “feel Like feeling sad today” in new single, and you?