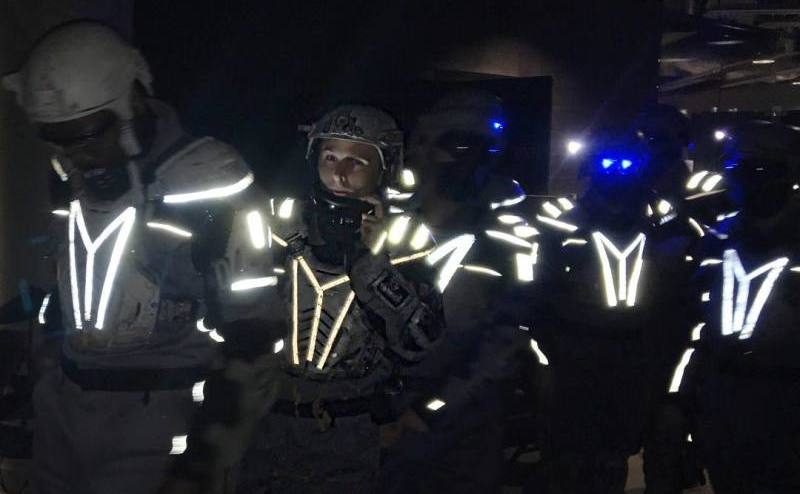 With most of Drones World Tour completed, Muse have “unveiled” how they get to the 360 stage unseen

Ambrose Bierces’ Devil’s Dictionary claims a star “is a person who works all her life to become famous and then wears sunglasses so people don’t recognize her”. Since Muse are not “mere stars” and have to get to a 360 degree stage unseen, with the audience surrounding them all over, sunglasses won’t help in this particular case…

What can conceal them and let them sneak to the centre of the 360 degree arena is grey soldier-like camouflage, which Muse have “unveiled” in today’s post via Twitter and Instagram. Why is “unveiled” in inverted commas? Well, in fact by this time most fans who saw Muse on the tour have already got it, without a clue from the trio. They also managed to quickly tell who was who among the people in disguise, as band members’ height easily gives them away.

But for some fans it was quite a revelation. One follower’s reply reads, “That means the band walked right past me and I didn’t even know”. So it seems that Muse have done an impressive job in an attempt to pass by unseen.

The spectacular Drones World Tour has reportedly brought Muse 23 million dollars from 34 shows. The stages on the tour arenas are set up with a circular stage in the middle, resembling U2’s 360 Tour, giving the rockers a 360 degree panoramic view of the audience.

Muse’s next arena destination is Moscow’s Olympic Stadium on June 21, followed in a row by UK”s Glastonbury (June 24) and an Eiffel Tower show in Paris (June 28). British stars have a festival-packed summer ahead of them, with dates booked into August 20.