Nickelback have changed their attitude to critics and haters. Moreover, they thank their haters for helping them coining it in.

As soon as Nickelback’s eighth album No Fixed Address was released worldwide on November, 17, rock music websites have also been busy sharing links to Hardeep Phull’s witty, provocative and in-your-face article “In defense of Nickelback: Haters hate, they cash in”, which was published on www.nypost.com. The references and comments to the post are mushrooming out, as the author bluntly and mercilessly reveals how the band’s singer Chad Kroeger used to react to his haters’ offensive statements about a decade ago. “While touring the UK in 2003, Nickelback’s Chad Kroeger was one angry dude”, the writer says. “When an audience member gave the Canadian band a middle-fingered salute, he reportedly responded by trying to have security throw out the concertgoer. On the same tour, a British journalist managed to cross the then-poodle-haired singer during an interview — Kroeger publicly challenged the hack to a boxing match” (read more).

All that only blew up negative feedback and increased the antifans’ base and, according to Phull, “made hating Nickelback a sport for music fans the world over”. There’s even been an online petition launched in order to cancel Nickelback’s 2011 Thanksgiving Day halftime show. The author brings up the latest hater’s act: “Just last month, a campaign waged by Londoner Craig Mandell attempted to raise money to keep Nickelback out of his city forever”.

The writer states, however, that the band has learned how to gain from the ever-ongoing hostility and media critisism, instead of firing back at their haters. “If [the critics] had stopped writing all this stuff about us, there would be no controversy . . . and we probably would have died out years ago”, the musicians joke. “They don’t know that they’re still responsible for us being around today”. 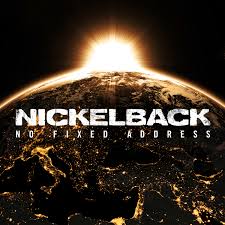 The author then predicts the success of the new album No Fixed Address to be close to that of their previous work titled Here and Now, which sold two million copies worldwide, breathing down Lady Gaga’s neck, while her budget expenditures to promote the album ARTPOP had been incomparably huge.

The title of the new release, No Fixed Address, is the reflection of the fact that the songs were recorded in many different places unlike before. Another recent major change for the band was leaving long-time record label Roadrunner Records last year. No Fixed Address is the band’s first release via Republic Records.

In the interview to Loudwire, frontman Chad Kroeger commented on the stylistic diversity of the new tracks: “We’ve got some serious left turns here. We just hired a horn section the other day. The guys that played on ‘Thriller’ for Michael Jackson. And we got some ladies in singing some background stuff, and Flo Rida’s rapping on this thing.”

The lead single from the album “Edge of a Revolution” was released on August 19, followed by the video for the song (see below), while the main pop theme “What Are You Waiting For?” saw the light on September 4. In support of the newly released longplay Nickelback performed on Jimmy Kimmel Live the same day the disc was out globally.