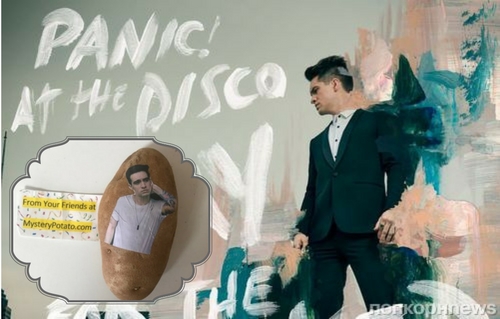 When your day starts with potatoes from Panic! At The Disco in the mail, is it for good luck?

On a regular day, your morning starts with picking up newspapers and mail from your mail box. But how would you react if you opened your mail and found potatoes, sent to you by Panic! At The Disco? In the envelope with an inscription «from your friends» Brendon Urie’s fans started receiving potatoes with the singer’s face on them. Fans wonder what the hell is going on…

Listen: Panic! At The Disco share teaser of new song ‘King Of The Clouds’

Is it an invitation to some closed event just for fans, where Urie will be performing ‘Say Amen’? Or does ‘Say Amen’ have little to do with it, because the potato scene just gave Panic! an idea how to intrigue fans before some big announcement? Anyway, it must be something massive, cause sending individually-tailored potatoes to fans takes some time and effort.

Panic! At The Disco have recently announced their new album, Pray For The Wicked. The record is due for release June 22 and is available for preorder here. Catch Urie and Co. touring in support of the new album this summer.

Pray For The Wicked Tracklist: