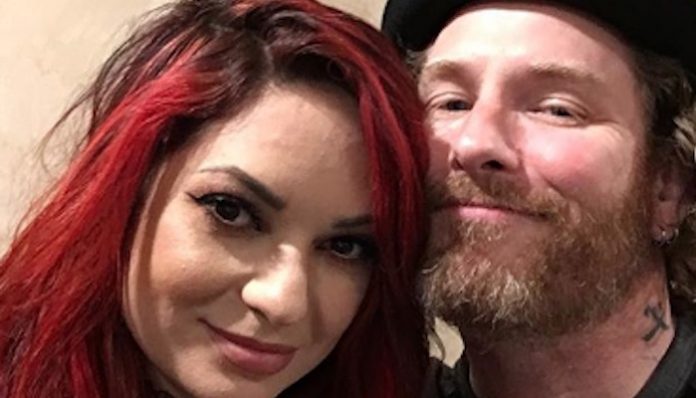 In best Vegas traditions, the couple got married by an Elvis Presley impersonator

Slipknot frontman Corey Taylor got engaged back in April, as you know. And it has just got official: on October 14 Taylor married his longtime girlfriend Alicia Dove! The wedding ceremony took place in Las Vegas. Check out the social media posts from the wedding below.

It comes as no surprise that the ceremony was led by an Elvis Presley impersonator – it’s Vegas after all. Hellyeah bassist Kyle Sanders shared a photo with the newlyweds. In the picture, we see Taylor wearing a hat, ripped jeans and a floral suit jacket. The bride was wearing a short party-style black dress. The two had only a couple of their best friends as guests (see the posts below).

Dove, a former Atlanta Falcons cheerleader, started going out with Taylor, while touring with Cherry Bombs, a performance act featuring dancers, fire artists, pole dancers and so on. The couple made their relationship public back in May 2018, toured together, then “got pulled apart for a while”. Dove was asked to share the story of how their relationships developed, and here is her reply:

“We kept running into each other and from just that alone he learned of CB [Cherry Bombs]. In 2017 he hit me up to tour bc he had seen us on the Buckcherry run. In building that tour together, we clicked intensely. We got pulled apart for a while, then came back together by the end of our tour.”

Last April Sliknot singer proposed to Dove, and the “cherry bomb” happily shared it in detail on Twitter:

“After breakfast at home, as I put the salsa back in the fridge I shut the door and he was standing there with a ring. Got down on one knee, and I immediately started crying on the floor with him. In our kitchen. In our sweats nothing fancy. It was f–king perfect,” shared Dove.

It’s the third marriage for Taylor, who was married to Scarlett Stone from 2004 to 2007 and to Stephanie Luby from 2009 to 2017. He has a 16-year-old son Griffin from his first marriage and a 26-year-old daughter from a previous relationship.

Congrats to Taylor and Dove on the big news! Be sure to stay tuned with us on AlteRock Facebook and AlteRock Twitter!