Taking Back Sunday have just shared the news: in February 2017 they will embark on a UK/European tour to support their new release, Tidal Wave, with Frank Iero and his new band The Patience, who are also releasing a new album called Parachutes.

The group are releasing their seventh studio album, Tidal Wave in just a couple of days. In the meantime, the rockers decided to share the second track off of the new record. The song is titled ‘Death Wolf’ and comes with an accompanying lyric video, which you can watch below.

And don’t forget to grab your copy of Tidal Wave album starting this Friday, September 16. The record is set for release via Hopeless Records, with pre-orders available now.

Catch Taking Back Sunday on their upcoming US tour or in 2017 in one of their European destinations – see the full list of dates below. Tickets for the European tour go on sale this Friday, September 16.

What do you think of the new track, ‘Death Wolf’? Are you planning to come to any of the band’s shows on the upcoming fall tour or UK/European tour next February? Be the first to leave your comments, share the article, and stay tuned with Alterock Facebook and Twitter to never miss on the news about your favorite alternative music!

Taking Back Sunday 2016 US Tour Dates: 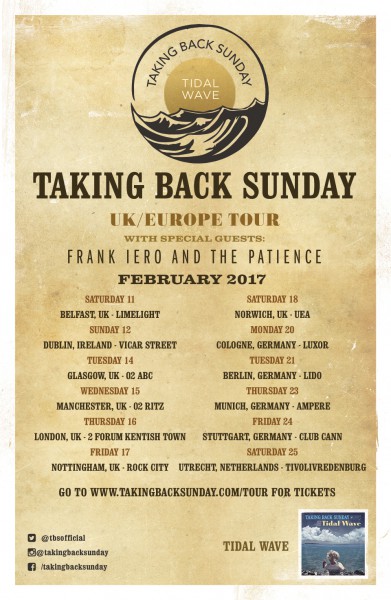