Andy Biersack, Black Veil Brides frontman, also known as Andy Black, is teasing his own talk show, simply titled The Andy Show. It will premiere already this fall and will be co-hosted by Biersack and his cousin Joe Flanders, reports AltPress. 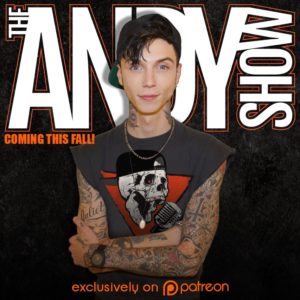 “TAS will be a weekly comedy talk show where we will discuss current events, what’s on our minds and also have the chance to chat with guests from the entertainment and music industry,” Biersack reveals in his Instagram post.

But having your own talk show is not a cheap thing to do, so Biersack and Co. are offering a monthly subscription through Patreon that give you access to special bonus material and, in turn, help fund the show.

Check out Biersack’s teaser and his full Instagram post introducing The Andy Show below. What guests from music industry would you like Andy to chat with on the show? Be the first to leave your comments and stay tuned with Alterock Facebook and Twitter to never miss on the news about your favorite alternative music!

When @flandangerous and I were little kids we would ruin every holiday for our family by putting on elaborate shows and productions that we required them all to watch, these shows all inevitably ended in someone not following our direction and then one of the kids (usually me) would have a temper tantrum and the show would be over. This abiding belief that people should watch us do things has carried on our entire lives and has lead to us making a talk show haha it features my mentor and manager @blasko1313 and constant creative collaborator and director @fatpogarty and it’s coming this fall! TAS will be a weekly comedy talk show where we will discuss current events, what’s on our minds and also have the chance to chat with guests from the entertainment and music industry. Making this show all that we want it to be won’t be cheap and we have invested a great deal of time and money into the process already. We have partnered with @patreon to set up a monthly subscription service for as low as $2.00 that will feature all kinds of special bonus material for subscribers. There is no requirement to sign up and if you’re strapped for cash we totally understand HOWEVER if you happen to be able to subscribe we promise to bring you fun and exciting content every week and hell…I will even give you my word that I won’t storm off in a temper tantrum at any point ? if you’re into watching us talk shit every week head on over to the link in my bio and subscribe today!!