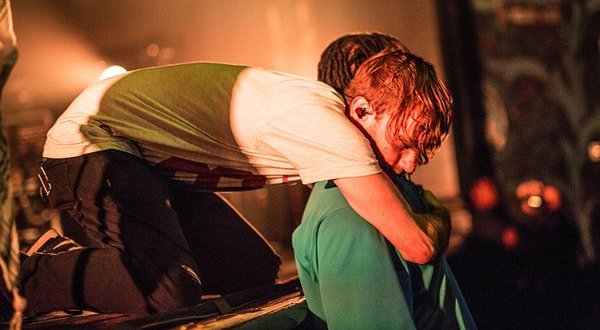 Bert McCracken, the affectionate singer of The Used, was so overwhelmed with emotions at the band’s recent Dallas show that he even leaned and hugged the unsuspecting security guy, standing by the stage with his back to the singer. The Used win today’s Tweet of the Day for the amazing photo of this touching moment by HOB.

And if you think about it, why not? The Used’ shows are so high-power that whenever rockers cannot contain their emotions onstage, it’s a good idea to share them with the people around. Except, we don’t know whether the security guy enjoyed such a sign of affection from Bert. But the band’s fans would be definitely excited if hugged by their favorite rocker during the concert.

The Used are currently on the road with their 15 Year Anniversary Tour: In Love and Death. The show in question took place at the House of Blues Dallas in Dallas, Texas on Saturday, April 16.

Thank you for the hugs Dallas! #TheUsed15 pic.twitter.com/byaUzC5GXJ