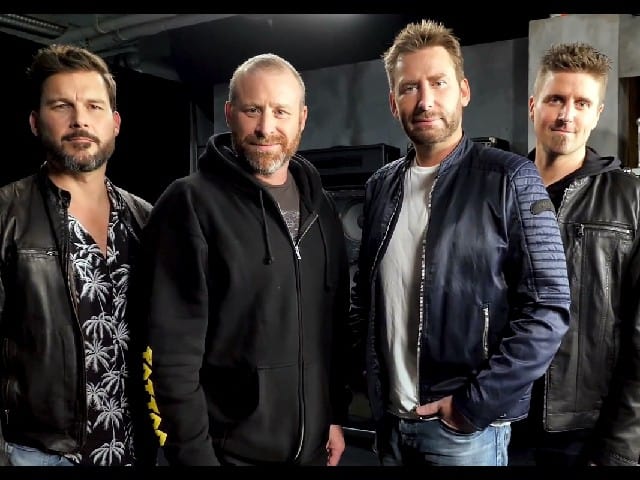 It’s been five long years since Nickelback dropped their previous album Feed The Machine. To say that the band’s fans are waiting for new music would be a massive understatement. It’s been too long. No wonder, Nickelback’s upcoming single ‘San Quentin’ and new album, due in November, are so anticipated.

Frontman Chad Kroeger and guitarist Ryan Peake have just hit Robyn Lane’s WRAT radio station to talk about their upcoming tenth studio record. The band admits they hoped to record the new album a lot sooner, when the pandemic got in the way. But the absence of deadlines gave them “a wonderful luxury” of doing what feels right and re-recording as many times as needed:

“Well, we should have been making a record a lot sooner, with all that time off,” says Kroeger. “But it’s weird to say this, but for 25 years it feels like someone’s been standing behind us with a cattle prod and telling us, ‘Hey, the record’s gotta be done at this time. We’re gonna tour at this time. […] But with this, we were, like, ‘We’ll get to it when we get to it.’

“And yeah, we took our time with it, which was just a wonderful luxury, to be able to sit back and, ‘No. I’m gonna play this guitar solo 40 more times for another three days and make sure it’s just exactly how we want it as opposed to deadline, deadline, deadline.”

Over the past few weeks, Nickelback have been teasing and performing a new single, ‘San Quentin’, which drops September 7. The posted 10-second snippet of the new song and fans’ live footage drew lots of attention to the forthcoming single, as its power and rhythm take us back to Nickelback’s iconic albums, like Silver Side Up. Some listeners claim it could be the heaviest song the band has ever written. “It’s a heavy rock song, and if you’ve seen us live, you would definitely get it. But I kind of like that people are feeling like it’s a surprise that we can have rock songs like that in the repertoire,” smiles Peake.

Nickelback fans are obviously curious if it means the rest of the album will sound somewhat like ‘San Quentin’. “All of our records are all over the map. We don’t have one record that really sort of sounds the same in terms of songwriting from top to bottom,” says Kroeger. “I don’t know how we sort of did that and how we got the acceptance from our fans to be able to do that, but we’re very lucky because we don’t have to record the same kind of music thinking to ourselves, ‘Well, the fans are expecting this, so we’ve just gotta give ’em a whole album of that.’ We can kind of do whatever we want.”

More: NICKELBACK team up with Google to make this hilarious ‘Photograph’ parody

The music video for ‘San Quentin’ will be launched by mid-September. It was filmed this past Tuesday, August 30, at the Simon Fraser University Convocation Mall in British Columbia. According to CTV News, hundreds of Nickelback fans took part in the making of the video.

The band also has a lot of plans for next year. Nickelback will embark on a U.S. tour in support of its new album in the summer of 2023. In addition, Nickelback documentary, which has been in the works for a few years is, reportedly, “very close to being released.”

Watch Nickelback’s full interview with Robyn Lane below, and be sure to join us on AlteRock Facebook and AlteRock Twitter!