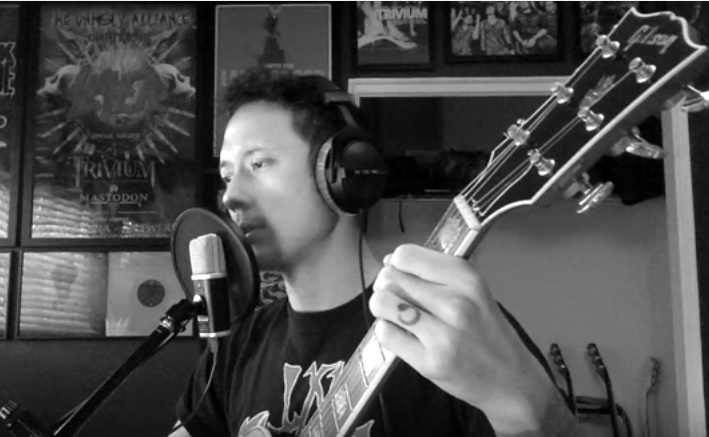 Even though closing-the-millennium pop idols Britney Spears, Christina Aguilera and Jennifer Lopez are still on demand this day, it’s their 1999′ breakthrough songs that took the world by storm and brought them unprecedented success. I was fourteen when the Spears-Aguilera-Lopez wave came to power and reeled me in with undying ‘…Baby One More Time’, ‘Genie in a Bottle’ and ‘If You Had My Love’.

Trivium‘s vocalist Matt Heafy is my peer (born in 1986), so there is nothing surprising in his choice of Spears‘ classic for a metal cover. You can be as metal as you want but these three hits are the staples only a deaf person wasn’t exposed to. Truth be told, Heafy’s take on ‘…Baby One More Time’ didn’t turn out truly metal. Heafy added some screamed vocals only at the very end, but overall we’d heard much heavier Spears’ covers on the web.

More: Trivium’s new song and music video ‘The Heart From Your Hate’ won’t leave you cold

Vocally, most of the cover in Heafy’s rendition was a bit of a torture for me to go through. Trivium singer shouldn’t have forced the high notes so much, aiming to sound like the original. But since it was a fan-requested cover as part of the “Kiichichaos Karaoke” challenge, hats off to Heafy for daring to record it. Watch the video from Heafy’s Twitch channel below.

This is not Heafy’s first pop cover. Just recently, he recorded a version of the Weezer’s cover of Toto hit ‘Africa’. Let’s see where Trivium fans’ imagination takes us on the next cover. Be sure to check out Heafy’s ‘…Baby One More Time’ cover and the 1999′ original music video below and tell us which you prefer.