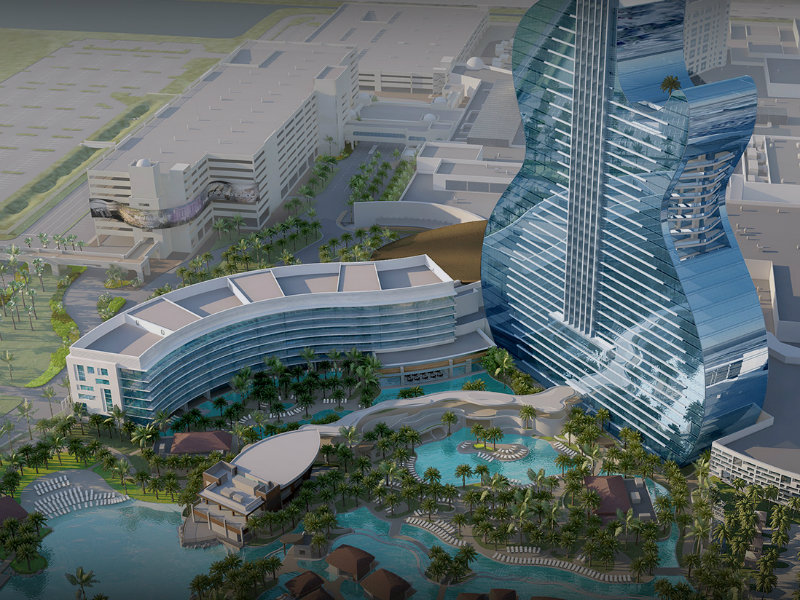 The construction of the guitar hotel cost $1.2 billion, and the guests are greeted by the rarest exhibit…

“It’s nice to have rock music so appreciated”, rock musicians are thinking across the globe, checking out the new mind-blowing Hard Rock Hotel built in Hollywood, Florida. The unique hotel, which has just opened its doors, boasts the shape of the guitar, all lit up and glowing.

The new guitar hotel was “designed to resemble back-to-back guitars, complete with guitar faces and brightly lit strings”, while its walls are made of the floor-to-ceiling glass panes. Check out the pics and the video of the state-of-the-art hotel below!

The hotel started accepting guests in late October, according to Alternative Press. The construction of this architectural beauty took over two years and cost $1.2 billion. The hotel is compared by musicians to The Statue of Liberty, as it’s 450 feet (137 cm) tall! It can offer 638 luxury rooms, and the posh detail to mention is that you’ll be greeted by Elvis Presley’s gold-plated piano, which is a temporary exhibit for the hotel debut.

The grand opening of the hotel included multiple events and saw some celebrities, such as Johnny Depp, Bella Thorne and the Chainsmokers. Besides a guitar smashing experience, the opening night saw live performances from Maroon 5, Sting, Alicia Keys, Lynyrd Skynyrd and Billy Joel.

But it wouldn’t be a Hard Rock Hotel without Hard Rock Live, a music venue that will be hosting about 100 shows a year. To finish with, the guitar construction will have a free light show around it with sound and water choreography and a 20,000-foot projection into the sky.

Needless to say, the guitar hotel has various casinos, clubs, bars and restaurants. On top of it, there’s a 13.5-acre pool and a lagoon for water sports, while some rooms even have a private swimming pool. If you want to book a room, be prepared to pay a few hundreds. For reservations go here.

Would you consider staying at this picturesque Florida hotel? Drop us your comments on AlteRock Facebook and AlteRock Twitter if you still haven’t. See you there!