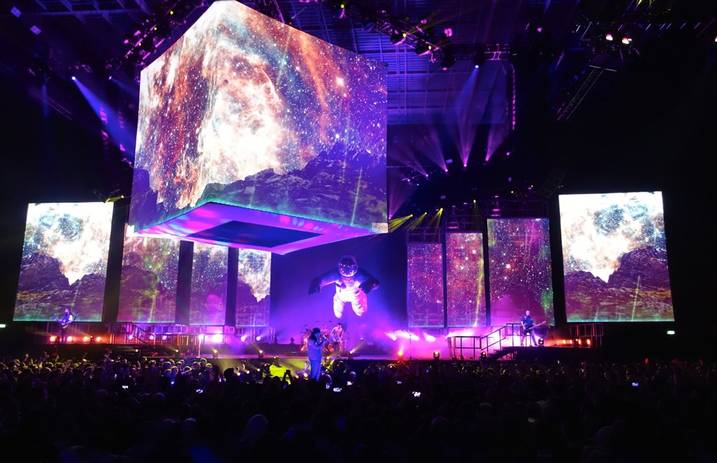 As we informed you a month ago, Avenged Sevenfold joined forces with the mindblowingly spectacular Cirque du Soleil to turn the stage production for their tour into a work of art. The band had named their new album, The Stage, for a reason, and this weekend the group presented their theatrical stage production live for the first time.

The first fans who were lucky to experience the result of this extraordinary collaboration were those who came to see the band live on January 7 in Dublin. In addition to the theatrics and A7X’s all-time hits, the audience also heard the band’s new songs from The Stage first time live. The outfit debuted ‘Paradigm,’ ‘Angels,’ ‘God Damn’ and ‘Sunny Disposition’ during their Dublin show. Check out the live footage of ‘Paradigm’ from different angles below.

Mirroring the lyrical concept of the new album, the stage production revolves around the notions of artificial intelligence and human urge to know why we are here:

“We wanted to write about artificial intelligence, not really in a sci-fi way, not in a Terminator sort of way, but in more in, like, a scientific way,” frontman M. Shadows explains. “We have this yearning to know the answers to the big questions about space and why we’re here; we can’t evolve fast enough to figure these answers out on our own, but we can do it through artificial intelligence. But there’s also some very scary downsides that could come if we don’t put the right safety precautions in there.”

Such a massive AI-themed stage production might imply major stage changes at different tour locations. The musicians are thinking about altering some venues altogether to ensure the best possible stage production and theatrical experience for the concert-goers. Moreover, instead of one long tour, Avenged Sevenfold have decided to go on two-week tour cycles and have a break for two weeks in between.

“This is gonna be drawn out into different types of touring, we’re not going on tour for six months, it’ll be two weeks on, two weeks off. It’ll be a longer cycle but we’re gonna roll with the punches. I don’t ever feel like we fit in. We’re going to be whatever we feel is right, and if it changes the industry, then great,” Shadows told Metal Hammer.

The band’s tour in support of The Stage album has just begun with the show in Dublin and will stretch into March 10, wrapping up with a gig in Oslo, Norway. Shadows and co. are touring with Disturbed and In Flames through Europe and the UK. See which location is near to you in the full tour schedule below.

Be sure to check out more footage of AX7’s live debut with Cirque du Soleil below. Leave us your comments and stay tuned with Alterock Facebook and Twitter to never miss out on the news about your favorite alternative music!